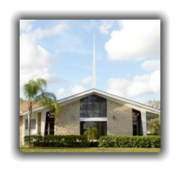 Word first came to Tampa Bay Baptists about a work in Forest Hills section in early Spring of 1953. In May, Rev Hugh Hanson began services in the Riding Academy building owned by Mr. and Mrs. H. A. Humphry of 9324 El Portal Drive.

With the property available, the next step was to locate the man God had been preparing for the task of beginning the new work. The Missions Committee met with Rev. H. E. Flynn of Orlando on the evening of January 31, 1955, and again on February 5, advising him the Missions Committee of the First Baptist Church had been led to feel that he was God's man for the task ahead to become the mission pastor.

The following Wednesday, a meeting was held and Rev. Flynn accepted the call. The work began on March 1, 1955. The basis for the beginning was to be a religious survey which had been taken sometime in the closing months of the previous year. These census cards represented the residents of the community and their denomination preference. There were many Baptists who had indicated an interest in a church in their area.

On March 18, a meeting was held in Forest Hills Riding Academy building to organize the work, to make plans for a name, and to vote on a temporary meeting place. At the first assembly there were 22 people present.

April 3, 1955, was selected as the first meeting date. A volunteer organist came, and Palm Avenue Baptist Church loaned a portable organ. At the first meeting there were 27 people present in Sunday School and 41 in worship service. During the invitation, 10 individuals presented themselves for membership by letter.

Rewards of a good beginning were evident from the beginning. The desire of the sponsoring church was to see the mission accept full responsibility in finance, leadership, and business. This challenge was met by the by the people with full awareness of the task ahead.

The mission became a full fledge church on the afternoon of January 25, 1959. The organizational sermon was given by Dr. Preston Sellers of our sponsor Church. Rev. Flynn was called by the church to continue his ministry and become our first pastor.

On March 5, 1961 we had ground breaking for our new sanctuary.

Years have passed since Northgate first established. God continues to use the church to be a light in this community.